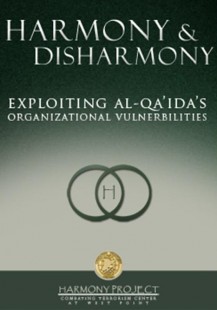 In the text of newly-released al-Qa’ida documents captured during recent operations in support of the Global War on Terror and maintained in the Department of Defense’s Harmony database, readers will see how explicit al-Qa’ida has been in its internal discussions covering a range of organizational issues, particularly regarding the internal structure and functioning of the movement as well as with tensions that emerged within the leadership.

The first part of the report draws on scholarly approaches including organization and agency theory, to predict where we should expect terrorist groups to face their greatest challenges in conducting operations. This theoretical framework is informed as much as possible by the captured documents, and provides a foundation upon which scholars can build as more of these documents are declassified and released to the public.

Our analysis stresses that, by their nature, terrorist organizations such as al-Qa’ida face difficulties in almost any operational environment, particularly in terms of maintaining situational awareness, controlling the use of violence to achieve specified political ends, and preventing local authorities from degrading the group’s capabilities. But they also face problems common to other types of organizations.

Agency problems created by the divergent preferences among terrorist group members present operational challenges, which can be exploited as part of a comprehensive counterterrorism strategy.  Understanding a terrorist organization’s internal challenges and vulnerabilities is key to developing effective—and efficient—responses to the threats they pose and to degrade these groups’ ability to kill. The captured al Qa’ida documents contribute significantly to this type of understanding.

The analysis contained in this report emphasizes that effective strategies to combat threats posed by al-Qa’ida will create and exacerbate schisms within its membership. Members have different goals and objectives, and preferred strategies for achieving these ends. Defining and exploiting existing fissures within al-Qa’ida as a broadly defined organization must reflect this intra-organizational variation in preferences and commitment in order to efficiently bring all available resources to bear in degrading its potential threat.  Many of our prescriptions are intended to induce debilitating problems that increase existing organizational dysfunction and reduce al-Qa’ida’s potential for political impact.

This theoretically informed analysis, along with assessments of the individual captured documents themselves, contributes to existing bodies of research on al-Qa’ida. It provides several tools for identifying and exacerbating existing fissures as well as locating new insertion points for counterterrorism operations. It presents an analytical model that we hope lays the foundation for a more intellectually informed approach to counterterrorism. And perhaps, most importantly, this assessment demonstrates the integral role that scholars can play in understanding the nature of this movement and in generating smarter, more effective ways to impede its growth and nurture the means for its eventual disintegration.

This document is a a detailed description of the goals of al-Qa`ida, the desirable qualifications of the group's leader, and...

Letter of Threat to Americans

This document contains a letter from Abu 'Abullah al-Kuwaiti outlining the next attack against the Americans and a statement highlighting...

This document outlines the goals and structure of al-Qa`ida's military, political, administrative and financial, and information committees, as well as...

This document is a letter from Usama bin Laden to King Fahd of Saudi Arabia, in which Bin Laden strongly...

This document is a management review of al-Qa`ida's personnel and organizational structure and an exhortation to ensure that the group's...

A Memo to Sheikh Abu `Abdullah

The author of this document, Abu Huthayfa, writes to his mentor (Usama bin Laden) and presents his views on the...

This document contains a number of letters that were written by Usama bin Laden between 1994 and 1998, and that...

This document is al-Qa`ida's constitution and breakdown of employee benefits for the period before the U.S. invasion of Afghanistan. This...

This document is a lengthy bureaucratic document that outlines the goals of al-Qa`ida, organizational procedures, bylaws, position descriptions, benefits, and...

This document contains five letters. The first letter is addressed to “Dear Brother Saif" and signed by “Your Uncle: Abu...

This is a lengthy document that examines the jihad waged by the Muslim Brotherhood against the Syrian regime of Hafiz...

A Short Report on the Trip from Nairobi

The author of this document, Saif al-`Adl (`Umar al-Sumali), divided his report into two sections: 1) The trip from Nairobi...

This document is a one-paragraph response by Usama bin Laden to a letter that Aba Khalid wrote to him. Bin...

This document is a two page typed letter discussing the situation in Afghanistan, the continuation of jihad in the Islamic...

Call to Jihad Against the Syrian Regime

This is the first part of a book that was written by abu Mus`ab al-Suri entitled “The Sunnies in Syria...

This 18-page pamphlet, titled “A Response to a Serious Judicial Error by Sheikh Al-Albani Regarding His Quietist Stance with Respect...

The author of this document writes against those who “innovate in religion." In particular, he believes that Abu Al-Bara' distorts...

This document is a letter from Abu Mus`ab to Abu Muhammad regarding a meeting with Abu Mus`ab al-Zarqawi. The author...

This document is a response to issues raised in a previous correspondence. It appears to be addressed to Al- Sahal...

This document contains two letters: The first letter was written by an unknown author and was directed to “sheikh Rida."...

Get the Idolaters Out of Arab Island

This document is a letter signed by the Qa`idat Al-Jihad Organization (commonly referred to as al-Qa`ida) that warns officials in...

A letter to Deobandi scholars in Peshawar, Pakistan. Usama bin Laden asks for a fatwa from them to encourage youth...

A short biography pulled from a jihadi website that focuses on Ayman al-Zawahiri's education, beliefs, formative experiences, his ties to...