A Short Report on the Trip from Nairobi 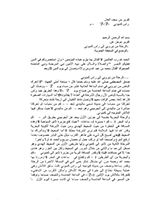 The author of this document, Saif al-`Adl (`Umar al-Sumali), divided his report into two sections: 1) The trip from Nairobi to Cape Kambooni and 2) The situation in the southern region. The notes made in the first section represent a terrorist scouting report for the Kenyan coast popular with tourists. Special attention is given to the areas where tourists congregate, and the patrols conducted by the police. Tactics for avoiding police detection are described, as well as navigational details for moving by ship along the coast. The second part of the document begins with ethnographic information about the Bajuni, Ogaden, and Jal Jaal people of coastal northern Kenya and Somalia. Political programs were established with all three to promote their cooperation with al-Qa`ida. The author also gave short reports about operations that were conducted by al-Qa`ida against Belgian soldiers and Indian forces. Saif al-`Adl has a high opinion of the local fighters who have proven to be successful and have inspired many Muslim youth to sign up and be fighters.

ISI Report on the Killing of 12 Jaysh al-Mujahedeen Members