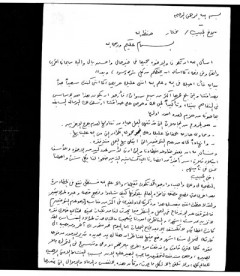 This document is a letter written by Sayf al-`Adl addressed to “dear brother” Mukhtar. In this letter Sayf al-`Adl argues that al-Qa`ida has suffered a series of major setbacks, caused in large part by the U.S. reaction to the 9/11 attacks. al-`Adl is concerned that al-Qa`ida was operating recklessly and attempting to lash out without considering all of the consequences. al-`Adl expresses his concern that bin Laden is unable to consider alternative opinions and fails to understand the extent of the challenges confronting the movement. al-`Adl also indicates that the recipient of the letter is the only person that bin Laden trusts. Ultimately, al-`Adl argues that al-Qa`ida
should cease all“external activities” until it has regrouped. al-`Adl also complains that a letter he sent to Abu Walid was posted on the al-Nida website, despite the fact that it was a personal communication.

A Report from Saif Al-`Adl