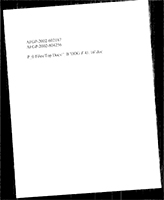 This document contains two letters: The first letter was written by an unknown author and was directed to “sheikh Rida.” In his letter, the author tries to defend “sheikh al-Maqdisi,” and explain al-Maqdisi’s stance against “sheikh Ibn Baz.” The author tried to clarify for “sheikh Rida,” that not only Ibn Baz’s fatwa “prohibiting accusing the [Arab] leaders of unbelief” led al-Maqdisi to criticize Ibn Baz, it’s Ibn Baz’s contradict stances from varies issues. The author used Ibn Baz’s two contradict fatwas regarding same issue as an example to support his argument. First fatwa was against“seeking the aid of infidels (Saddam Hussein) when the Syrian Mujahidin needed his help to overthrow the regime of Hafiz Al-Assad in Syria” in 1982. The second one was issued in different timing and different occasion | when Ibn Baz “allowed the Gulf rulers to use the aid of“infidels” [U.S. and the West] to strike Saddam Hussein” after his invasion to Kuwait. The author confirmed that Ibn Baz“has issued other fatwas to serve the interests of the [Saudi Arabia] regime.” The second letter wasn’t signed also, and it was directed to“my dear sister.” In this letter, the author asked for his sister opinion about a letter he wrote to“Aymen,” and welcomed any changes that she may want to add to his letter to“Aymen.” He also reminded her to take the stuff that was sent to her by“Aymen to Saudi Arabia.”