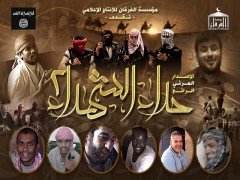 The text in the image reads (from top to bottom): “mu’assasat al-furqan lil-intaj al-i‘lami tuqaddim al-isdar al-mar’iyy al-ra’i‘—hida’/huda’ al-shuhada’ 2 (“al-Furqan media foundation presents the excellent video production—the chanting of caravans of martyrs”). The title of the video is represented visually at the top with the image of a camel caravan on the horizon, driven by its riders to cross the desert dunes.

The preeminent symbol of Arab culture is the camel, as the camel made Arabian nomadic life possible. It was the favorite subject of pre-Islamic poets, and it is mentioned in the Qur’an as a sign of God’s creative power (Q 88:17). In jihadi imagery, camels are most often used to suggest a caravan. `Abdullah Azzam famously urged supporters to "Join the Caravan" (the title of an influential text on jihad) and the inclusion of camels in an image may evoke the idea of traveling to join jihad or the "caravan" of martyrs.