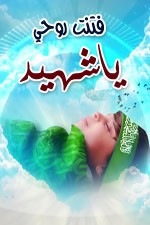 This specific image, which is from an album cover, brings together a number of elements that are typical of jihadi visual motifs regarding martyrs (shadid, pl. shuhada’). For instance, the background is a bright blue sky and white clouds, and there is an arc of rays of light emanating from the body of the pictured child. In addition, little birds appear in the distance, soaring upwards near the deceased’s head. The world of birds is very important in the symbolic language of Islam. Pre-Islamic Arabs imagined soul birds fluttering around the grave of the deceased, and the bird continues to symbolize the flight of the soul beyond the confines of this world. Moreover, the souls of martyrs are believed to live in the crops of green birds. Here, the deceased appears to be a very young boy, donning the typical green headband of Hamas/‘Izz al-Din brigades, which bears the text of the shahada (Islamic testimony of faith holding that there is no god but Allah and that Muhammad is his messenger). The deceased’s body is covered with a blanket watermarked with what is likely also a calligraphical representation of the shahada. Images of Muslim women and children are designed to evoke sympathy for victims of enemy violence, and to provoke men into responding against the perceived injustice by joining the ranks of a given group.

As for the dominant green in the image, green is considered the traditional color of the Prophet Muhammad’s tribe, and has been adopted as a sacred color based on Qur’anic verses (76:21; 18:65-82) and a reliable hadith (prophetic tradition or report) that associates green with “universally good things.” The color is also related to jihadi doctrine, as it is believed that while the corpses of martyrs lay in their graves, their souls are put into the bodies of green birds that drink from the rivers of Eden and eat from its fruit.

Finally, the white clouds in the image evoke Allah’s total inscrutability prior to creation. The cloud is also the bearer of rain and therefore bounty (khayr, which is also a synonym for rain), and is thus a sign of good things to come. The caption, which is the title of the album and the name of the first song featured on the album, ties all the elements together and solidifies the meaning of martyrdom for the viewer/listener. It reads: “fattanta ruhi ya shahid” (“you have enchanted my soul, O martyr”). The words “ya shahid” (“O martyr”) appear in red.  All of the songs on the album are performed by Ayman al-Hallaq.