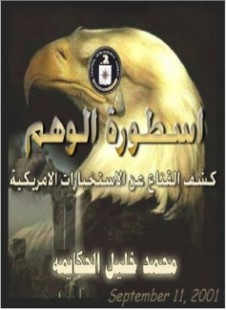 The image is the cover of a document analyzing/describing the failures of American intelligence, particularly the CIA. As provided in the image, the document is entitled “usturat al-wahm: kashf al-qana‘ ‘an al-istikhbarat al-amrikiyya” (“The Myth of [Self-]Delusion: removing the veil from American Intelligence”). At the bottom of the image appears the name of the author, Muhammad Khalil al-Hukayma, a deceased leader of the Egyptian al-Jama‘a al-Islamiyya, whose faction was said to have allied itself with al-Qa‘ida in 2006. Al-Hukayma (also known as Abu Jihad al-Misri), who appeared in an al-Sahab video announcing this merger, was killed in a U.S. airstrike in Pakistan on 31 October 2008. (For a detailed analysis of the document, see Brian Fishman, Al-Qaida’s Spymaster Analyzes the U.S. Intelligence Community, 6 November 2006.)

Jihadi propaganda often marks important jihadi operations/violent events in order to establish these events as key milestones that shape the current jihadi movement. Usually, these events are reinterpreted as illustrations of the effectiveness of the violent jihadi struggle and its success in targeting its enemies. In other words, the illustrations are used as examples of jihadi victory against much stronger and more powerful Western forces and evidence of the imminent victory of jihadist Islam over Western imperialism and secularism.

This specific image contains both a visual and textual reference to the events of 9/11 and is dominated by the American symbol of power, the bald eagle. However, American symbols of strength—both economic (Twin Towers) and physical (military)—are portrayed as broken and weak. The Towers are shown in their last hours, burning and smoking, and the eagle sheds a tear.

The eagle is a relatively common motif in Islamic imagery, though the image clearly marks its American context with the emblem of the CIA on (or even instead of) the eagle’s eye.