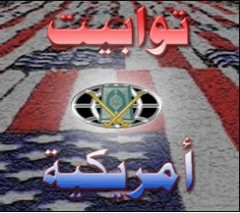 The American flag, or parts thereof (such as the stars and stripes), are widely used in jihadi propaganda to evoke negative sentiments towards U.S. foreign policy and military campaigns. The stars and stripes are also used to color other symbols in an image, thereby linking the symbols to U.S. foreign policy and military intervention in the Muslim world. The idea is spelled out directly in the phrase “tawabit amrikiyya” (“American coffins”). The red of the caption is the color of fire, blood, passion, impulse and danger.

The image includes an old logo of the Global Islamic Media Front (GIMF). On a black background, the full text of the shahada (Islamic testimony of faith holding that there is no god but Allah and that Muhammad is his messenger) appears at the top. Under that appears the Arabic name of GIMF: “al-Jabha al-I‘lamiyya al-Islamiyya al-‘Alamiyya.” The dominant element in the logo is the representation of a globe with a Qur’an and two crossed swords in front of it. Jihadi visual propaganda uses images of the globe/planet earth in order to globalize localized issues and conflicts, as well as to articulate the global aims/nature of the jihadi struggle and/or particular groups.