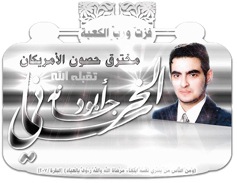 This specific image is of Abu Mallal al-Hummam Khalil Muhammad al-Balawi, aka Abu Dujana al-Khorasani, the double (or rather triple) agent who carried out the suicide bombing of CIA FOB Chapman that killed seven CIA agents in Khost on 30 December 2009.

The caption reads (from top to bottom): “fuztu wa-rabbi al-ka`ba, mukhtariq husun al-amrikan, taqabbalahu Allah, Abu Dujana al-Khurasani” (“I have succeeded, by God Lord of the Ka`ba, the infiltrator of American fortresses, may God accept him, Abu Dujana al-Khurasani”). The caption at the very bottom in fine print is a Qur’anic verse (Q 2:207), that reads: “wa-min al-nas man yashri nafsahu ibtigha’a mardat Allah wa-Allahu ra’uf bil-`ibad” (“and there are those who barter their soul in desire of God’s approval, and God is most merciful towards [His] worshipers”). The first phrase “fuztu wa-rabbi al-ka`ba” is from a famous  hadith (prophetic tradition or report) attributed to a companion of the Prophet, Anas b. Malik’s uncle, as his last dying words when he was pierced and stabbed with a spear through his chest. The phrase conveys a great sense of achievement on the part of the speaker for experiencing imminent death and the desired rank of martyrdom. The image as a whole commemorates Abu Dujana as a hero. The dominant white evokes notions of death in a state of purity, grief and mourning, and it is the color of shrouds.