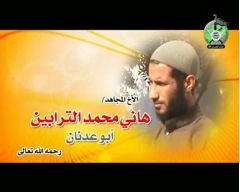 This specific image is a funerary image to commemorate the deceased in the picture. Framed portraits are meant to remind the viewer of their own family pictures, suggesting the idea that the figures are everyday people carrying out a common duty suitable for any member of the community.  While framed martyr photos are found in a wide variety of propaganda material, they are most common as a visual motif in jihadi propaganda.

The caption contains the figure’s name, title and a prayer phrase for the dead: “al-akh al-mujahid hani muhammad al-tarabin abu `adnan, rahimahu Allah ta`ala” [the brother, mujahid (fighter) Hani Muhammad al-Tarabin (aka) Abu `Adnan, may God have mercy on him]. At the top right is the JAA’s logo: an AK with a black banner bearing the shahada (Islamic testimony of faith holding that there is no god but Allah and that Muhammad is his messenger), under two crossed swords and the seal of the Prophet Muhammad, all against the background of a green globe.