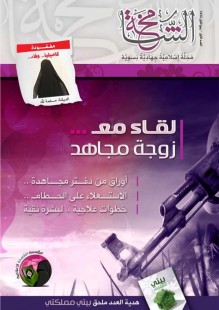 The image is the cover page of the first issue of the  women’s magazine al-Shamikha, produced by Shumukh al-Islam network. At the bottom left corner appears the name “al-Shamikha Media Foundation” and the al-Shamikha logo. The logo is a circle containing the figure of a fully covered and veiled woman against a red/pink sky with white clouds, with a Qur’an nestled in green leaves to her left. These elements are common jihadi imagery motifs.  The white clouds in the logo and on the surrounding cover image evoke Allah’s total inscrutability prior to creation. The cloud is also the bearer of rain and therefore bounty (khayr, which is a synonym for rain), and is a sign of good things to come.

At the right side there is an assault rifle, which expresses the militant nature of the jihadi struggle and in the top left of the image appears a missing person note with the caption (from top to bottom): “mafquda-Kamilia…Wafa’-al-diyana: muslima li-lah” (“missing-Camelia [Shehata]…Wafa’ [Constantine]-religion: Islam [lit., surrendered herself to God]”).  This refers to a well known controversy in which two Coptic women who allegedly converted to Islam were kept in seclusion by Coptic authorities.  The use of pink is somewhat unusual but is probably a reflection of the intended audience.

Cover Image from Lecture on Life of Husayn