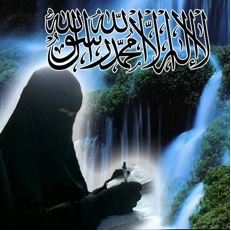 The image appears on Facebook accompanied by a piece originally published in a magazine for women, al-Shamikha (see Issue 1, p. 8), produced and published online by Shumukh al-Islam Network. The article is entitled “Pages of a [female] jihadist’s diary.”

The water in this image is used to symbolize God’s promised assistance and generosity to the pious. Islam ascribes sacred qualities to water. It is the origin of all life on earth and the substance from which God created man (Qur’an 25:54). It is also a symbol of creation, life, sustenance and  purification, and thus is used to evoke notions of religious purity, afterlife and heavenly paradise. Like other occurrences of water in jihadi propaganda, the waterfall purports to elicit notions of the afterlife and heavenly paradise, while also suggesting an ongoing or active progress  toward greater religious piety. In this manner, waterfalls are often associated with the soul, its spiritual progress and, ultimately, its elevation to heavenly paradise. The waterfall’s appearance also resembles light rays,  which are commonly associated with pictures of martyrs or those seeking martyrdom.

Another dominant element in the image is the lush greenery, which, like the water, resonates the idea of God’s benevolence, and is symbolic of creation, life and sustenance. Furthermore, green is considered the traditional color of the Prophet Muhammad’s tribe, and has been adopted  as a sacred color based on Qur’anic verses (76:21; 18:65-82) and a reliable hadith (prophetic tradition or report) that associates green with “universally good things.” Both the water and the greenery, coupled with the text of the shahada (Islamic testimony of faith holding that there is no  god but Allah and that Muhammad is his messenger) at the top, give the female figure a particular jihadi context. Even without the al-Shamikha piece, the object of the author’s writing could be easily understood by the viewer.