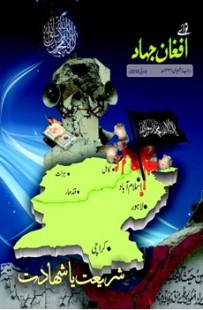 The image is the cover of the July 2010 issue of the magazine Nawa-i-Afghan Jihad. It features a map of Afghanistan and Pakistan without bordering countries, covered partially in blood and marked with a black banner bearing the shahada (Islamic testimony of faith holding that there is no god but Allah and that Muhammad is his messenger). This combination of elements designates the pictured region as an important theater for jihad, and implies a national obligation to join the struggle.

It should be noted that, according to prophetic tradition (hadith), the black flag was the battle flag of the Prophet Muhammad and it was carried into battle by many of his companions. The image of the black flag has been used as a symbol of religious revolt and engagement in battle (i.e., jihad). In the contemporary Islamist movement, the black flag is used to evoke notions of jihad and of reestablishing the Islamic Caliphate.

Finally, above the bombed structure of a minaret is a calligraphic representation of the shahada in the shape of a moon. The latter plays a pivotal role within the Islamic system. It is laden with religious, astrological and spiritual significance, and it governs all daily life, as the Islamic calendar is a lunar one. In the narrower context of Islamic jihadi ideology, the moon is typically combined with motifs that signal notions of afterlife and martyrdom. The perceived attack on Pakistan’s Muslim character is expressed in the bombed structure of the minaret and a burning copy of the Holy Qur’an.