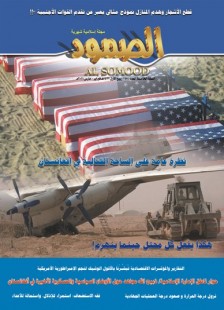 The image is the cover of the February-March 2011 issue of the Taliban’s monthly magazine, al-Sumud. Referring to the picture of the American coffins and the crashed military plane, the caption in blue reads: “nazra ‘amma ‘ala al-saha al-qitaliyya fi afghanistan; hakadha yaf‘al kull muhtall hinama yanhazim” (“a general look at the theater of combat in Afghanistan; may every occupier do this when they are defeated”). The caption is also the title of one of the articles that appears in the issue (see page 65).

The American flag, or parts thereof (such as the stars and stripes), are widely used in jihadi propaganda to evoke negative sentiments towards U.S. foreign policy and military campaigns. The stars and stripes are also used to color other symbols in an image, thereby linking the symbols to U.S. foreign policy and military intervention in the Muslim world.