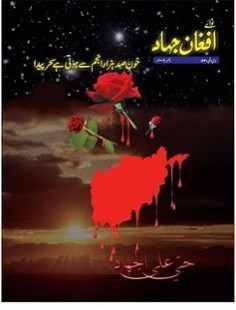 The image is the cover of the December 2009 issue of the magazine Nawa-i-Afghan Jihad. The dominant element in the image is the blood red of the map and flowers, both common visual motifs in jihadi propaganda. The appearance of Afghanistan’s map without bordering countries evokes a national context and scope of that specific jihad. Hence, the map designates Afghanistan as an important theater for jihad and implies a national obligation to join the struggle.  Flowers in general represent vitality, as well as life and its incessant pace, and thus will evoke notions of life after death, paradise and martyrdom, especially in the context of jihadi imagery. Red flowers or roses lack the purity of white ones, but they are symbolic of martyrdom by violent struggle. Notably, the map and the red roses are depicted as dripping blood, which colors the caption under the map. That caption reads: “hayy ‘ala al-jihad” (“make haste to jihad!”).

The presence of white stars in the heavens above the map heightens the perceived divine injunction for “making haste to jihad” and the desired reward for carrying it out.