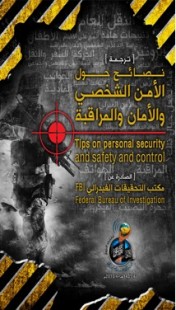 The image is the cover of a file translated from English into Arabic. The title reads: “Tips on personal security and safety and control, published by the FBI.” The logo at the bottom is that of Nukhbat al-I‘lam al-Jihadi (Jihadi Media Elite), a jihadi distribution company. The significance of this image lies in the content of the file, which is widely distributed on the internet and is perceived as an important part of jihadi fighters’ training and familiarization with the American enemy. The caption at the bottom of the post indicates that the manual was translated by “ansar qa‘idat al-jihad” (“supporters of Qa‘idat al-Jihad [base of jihad–al-Qa’ida]”).

Finally, a logo appears at the bottom of the image that includes two other important elements in jihadi propaganda. The first is the black banner. According to prophetic tradition (hadith), the black flag was the battle flag of the Prophet Muhammad and it was carried into battle by many of his companions. The image of the black flag has been used as a symbol of religious revolt and engagement in battle (i.e., jihad). In the contemporary Islamist movement, the black flag with the shahada (Islamic testimony of faith holding that there is no god but Allah and that Muhammad is his messenger) is used to evoke notions of jihad and of reestablishing the Islamic Caliphate. The second significant element in the logo is the globe, which in jihadi visual propaganda is used to globalize localized issues and conflicts, as well as to articulate the global aims/nature of the jihadi struggle and/or particular groups.