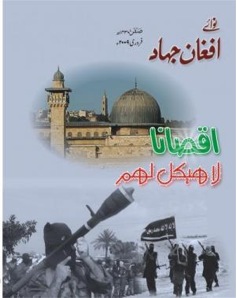 The image is the cover of the February 2009 issue of the magazine Nawa-i-Afghan Jihad, Pakistan. At the upper part of the image, there is a picture of the al-Aqsa mosque (located in Jerusalem). While recognized and revered by all Muslims, the mosque is mostly a powerful symbol of Palestinian nationhood.

The caption reads simply: “aqsana, la haykal lahum” (“our Aqsa [mosque], they have no temple”). “They” may refer to the Jews, as the overall massage is that the site belongs exclusively to the Muslim nation, and that the Jewish holy temple (the most important religious Jewish center in biblical times, which, according to Jewish tradition, was located in the area where the al-Aqsa mosque is located today) never existed, or will never be rebuilt.

The combination of the mosque, together with the other elements represented in the image, is designed to evoke strong religious sentiments and incite the viewer to join the struggle. For instance, one of the figures at the bottom is holding a black banner bearing the text of the shahada (Islamic testimony of faith holding that there is no god but Allah and that Muhammad is his messenger) and a sword under it. The black banner is the joint symbol of vengeance and revolt that traces its roots to prophetic times. According to prophetic tradition (hadith), the black flag was the battle flag of the Prophet Muhammad and it was carried into battle by many of his companions. The image of the black flag has been used as a symbol of religious revolt and engagement in battle (i.e., jihad). In the contemporary Islamist movement, the black flag with the shahada is used to evoke notions of jihad and of reestablishing the Islamic Caliphate.

The sword suggests a desire on the part of the designer to link the image to early Islamic history and the first generation of Muslims. Swords are seen as noble weapons that embody the religious purity, nobility, and righteousness that is associated with the Prophet, his companions and their successful military campaigns. This helps depict current jihadi activities as modern extensions of those campaigns and lends them an aura of legitimacy. Finally, the armed nature of the struggle is clearly expressed in the armed figures at the bottom, particularly through the figure holding the RPG.