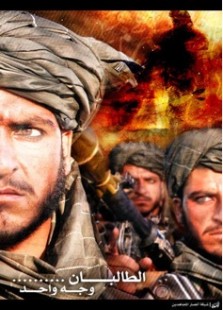 The dominant feature of the image is the face of the warrior, which is accompanied by the caption: “al-taliban-wajh wahid” (“the Taliban–one face”). Thus, the Taliban is presenting itself as a unified front and headed in the same direction (another meaning of the word “wajh”).  The words thus seem also related to the centrality of the “path metaphor” in the Islamic tradition, according to which being righteous means following “a correct or straight path.”  Another interpretation or meaning of the text is an implied contrast with the munafiq (hypocrite), a term which is associated in Arabic (as in English) with the idea of being “two-faced” or insincere.

The image also includes other visual elements, like the rocket and the flames. The yellow and red of the flames invoke the pain of separation and a longing to be united with God, that is, the longing for death and achievement of martyrdom.

This image was created by “Ansar al-Mujahidin Network” and their name appears in the lower right corner.