Logo of the Mujahadin Electronic Network 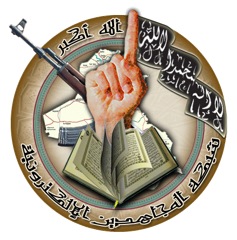 The image is the logo of the now seemingly defunct Mujahadin Electronic Network (شبكة المجاهدين الالكترونية). It combines a number of common jihadi elements, including the finger pointed upward, which is associated with the gesture made when articulating the shahada (Islamic testimony of faith holding that there is no god but Allah and that Muhammad is his messenger). In addition, there is an AK47, which manifests the violent nature of the jihadi struggle, and a map of Iraq. Significantly, the map of Iraq is depicted without bordering countries or bodies of water, thereby evoking the national context and scope of that specific jihad. Thus, the map designates Iraq as an important theater for jihad and implies a national obligation to join the struggle. Finally, the image contains the texts of the takbir (the words “Allahu Akbar,” or “God is Great”), the Qur’an and the shahada, each of which emphasizes the religious/theological nature of the jihadi struggle and the obligatory duty of every Muslim to participate in it.

Notably, the shahada appears on a black banner, the mast of which is the pointed finger.  According to hadith (prophetic tradition or report), the black flag was the battle flag of the Prophet Muhammad and it was carried into battle by many of his companions.  In the contemporary Islamist movement, the black flag is used to evoke notions of jihad and of reestablishing the Islamic Caliphate.