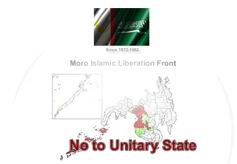 The logo also features the moon, which plays a pivotal role within the Islamic symbolic tradition. Specifically, the moon is laden with religious, astrological and spiritual significance, and it governs all daily life, as the Islamic calendar is a lunar one. In the narrower context of Islamic jihadi ideology, the moon is typically combined with images that signal notions of righteousness, afterlife and martyrdom. Here, it is combined with overt signals of belligerence, as represented by the color red, as well as the appearance of a sword. Even more than the image of a full moon, the image of a white crescent moon constitutes an overt symbol of Islamic identity that highlights notions of purity and religious piety. The white also evokes the notion of death, as it is the color of grief and mourning, the color of shrouds. Finally, the sword in the logo suggests a desire on the part of the designer to link the group to early Islamic history and the first generation of Muslims. Swords are seen as noble weapons that embody the religious purity, nobility and righteousness that is associated with the Prophet, his companions and their successful military campaigns. This helps depict current jihadi activities as modern extensions of those campaigns and lends them an aura of legitimacy.

The map in the image depicts the Philippines without bordering countries or bodies of water, and the Bangsmoro region is highlighted, evoking a regional context and scope of that specific jihad. This designates the region as an important theater for jihad, and implies a national obligation to join the struggle.