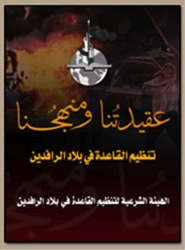 As the logo in the top center indicates, the image was created by or for Jama‘at al-Tawhid wal-Jihad (JTJ, or Society for Monotheism and Jihad), the organization that was initially led by Abu Mus‘ab al-Zarqawi, but which became part of the al-Qa‘ida network in Iraq (AQI) in 2004 under the name Tanzim Qa‘idat al-Jihad fi Bilad al-Rafidayn. The text of the caption reads: “‘aqidatuna wa-manhajuna—tanzim alqa‘ ida fi bilad al-rafidayn—al-hay’a al-shar‘iyya li-tanzim al-qa‘ida fi bilad al-rafidayn” (“our doctrine and method—AQI organization—the Islamic law committee of the AQI organization”).  The group’s logo contains an  open Qur’an and an AK-47 and evokes a phrase commonly used by jihadists “kitabun yahdi w sayfun yansur” (a book [Quran] to guide, and a sword [for] victory).  The phrase is attributed to Ibn Taymiya, an influential religious scholar revered by many jihadists.

The writing at the bottom appears in bright white font against a black background. While the white—the color of shrouds—evokes notions of death, grief and mourning, the black is a dominant color in the Arab-Islamic tradition. According to prophetic hadith, the black flag was the battle flag of the Prophet Muhammad and it was carried into battle by many of his companions. The image of the black flag has been used as a symbol of religious revolt and engagement in battle (i.e., jihad).