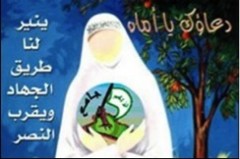 Women hold a powerful symbolic value in Islamic culture, as they are considered the bastion of their family’s honor. Frequently the image of a Muslim woman driven to sacrifice through militant activism aims to create an intense sense of shame in a male viewer and jihadist pundits frequently cite the sacrifices of women as a challenge to the rajulla (manhood) of their readers, using shame and pride as motivations for joining the jihadi struggle. Moreover, images of Muslim women in many cases are designed to evoke sympathy for victims of enemy violence, and to provoke men into responding against the perceived injustice by joining the ranks of a given group.

This image features a faceless female figure, donning traditional white Middle Eastern garb. The tree in the background evokes God’s mysteries, namely, origin, growth and death. Sprung from a tiny seed in inert clay, the tree grows without apparent nourishment, sprouting anew if cut, dying in winter and living in spring. The figure’s white clothes are designed to evoke notions of death in a state of purity, grief and mourning, as white is the color of shrouds. Grief is also embodied in the logo held by the figure, which is the logo of the Islamic Front for the Iraqi Resistance (al-Jabha el-Islamiya lil-Moqawama al-Iraqiya, or JAMI), and which represents those group members who are carrying out jihad. The figure clutches the logo as a mother would her child and the caption, also in white, verbalizes this idea: “du‘a’uki, ya ummah, yuniru lana tariq al-jihad yuqarribu al-nasr” (“your prayer, O mother, illuminates the path of jihad for us and brings victory closer”). The words “path of jihad” in the caption reflect the pivotal “path metaphor” in Islam and the idea that being righteous means following “a correct or straight path,” i.e., the path of jihad.