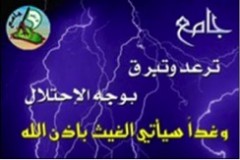 As in many cultures, weather phenomena are seen in Islam as an act of God. Their appearance in jihadi visual propaganda is used to evoke notions of divine power, wrath and justice, and remind the audience of God’s total inscrutability prior to creation. By using such symbols, jihadi groups are able to represent themselves and their cause as instruments of divine will and power. In the current image, the symbols imply hope, calm and the salvation that will come after the storm (the violent jihad, represented by the lightning bolts), and warn the enemy of the consequences of God’s wrath. The caption utilizes white and yellow letters against the dark purple/blue background of the sky and reads: “jami‘ tar‘adu wa-tabriqu bi-wajh al-ihtilal, wa-ghadan saya’ti al-ghayth bi-idhni Allah” (“JAMI [Islamic Front for the Iraqi Resistance] thunders and flashes [lightning bolts] vis-a-vis the occupation, and tomorrow the rain will come, God permitting”).