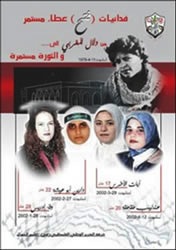 It is believed that Muslim martyrs will be highly rewarded in the afterlife for their sacrifice and that they hold a special position in heavenly paradise. It is therefore not surprising that martyrdom is a central theme in militant visual propaganda. Furthermore, women hold a powerful symbolic value in Islamic culture, as they are considered the bastion of their family’s honor. Moreover, images of Muslim women in many cases are designed to evoke sympathy for victims of enemy violence, and to provoke men into responding against the perceived injustice by joining the ranks of a given group.

The caption at the top reads: “fida’iyyat fatah ‘ata’ mustamirr; min dalal al-maghribi ila…wal-thawra mustamirra” (“female fedayeen [shock troops willing to die] are a continuous gift from Dalal al-Maghribi to…and the revolution continues”). The five women in the image are being hailed as the first women to carry out suicide attacks against Israeli targets. The four in the center of the image carried out attacks in and around Jerusalem during 2002. From left to right, they are: Wafa’ Idris, who died 28 January 2002; Darin Abu ‘Isha, who died 27 February 2002; Ayat al-Akhras, who died 29 March 2002; and ‘Andalib Taqataq, who died 12 April 2002. The Fatah logo is visible in the top right corner of the image.