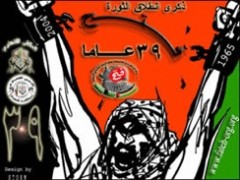 The image, created by Fatah, is a celebration of “dhikra intilaq al-thawra 39 ‘aman” (“the 39th anniversary of the outbreak of the revolution (1965-2004)”). The black, red and green of the background constitute the Palestinian flag, divided by the outstretched arms of the figure depicted as breaking out from shackles, thereby symbolizing the aspiration to end the Israeli occupation of Palestinian lands. The fact that the figure is depicted wearing a kafiyya (traditional head gear) is not a coincidence, as the kafiyya has become one of the symbols of the Palestinian cultural/national identity. Indeed, Yaser Arafat, the founder of the Fatah, wore the kafiyya in all of his public appearances.