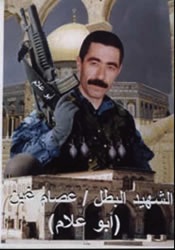 While Muslims across sectarian lines share a reverence for many holy sites, some sites hold special significance for certain groups. For instance, the Dome of the Rock (located in Jerusalem) is recognized and revered by all Muslims, as it was built in 692 A.D. by the Umayyid caliph ‘Abd al-Malik on the site where Muslims believe the Prophet Muhammad ascended to heaven in his mi‘raj (night journey). Indeed, it is considered the third holiest site in Islam after Mecca and al-Madina. At the same time, the Dome of the Rock is a powerful symbol of Palestinian nationhood.

The figure in the image, identified in the caption as “al-shahid al-batal ‘isam ghaban abu ‘allam” (“the martyr and hero ‘Isam Ghaban aka Abu ‘Allam”), was killed along with his son ‘Allam in an incident of factional violence between Hamas and Fatah in the neighborhood of Shaykh Radwan in Gaza City in December 2002. He was a member of Fatah and a police officer for the Palestinian Authority. The incident led to mutual accusations and infighting between the two groups.

The mosque in front of Ghaban is the al-Aqsa mosque, also a powerful symbol of Palestinian nationalism.