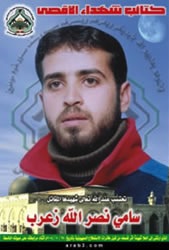 The image combines a number of common motifs in jihadi imagery. For instance, the figure of the deceased is portrayed against a blue background and a large logo of the Kata’ib. In the top right appears a moon. The moon plays a pivotal role within the Islamic system. It is laden with religious, astrological and spiritual significance. It governs all daily life, as the Islamic calendar is a lunar one. In the narrower context of Islamic jihadi ideology, the moon is typically combined with motifs that signal notions of afterlife and martyrdom, like the sky blue of the background, the clouds and the holy site of al-Aqsa shown here. Together, these elements suggest the martyr’s righteous character and heavenly reward. The use of al-Aqsa is particularly notable, as its appearance reminds the viewer of the occupation of Palestine. In addition, while the al-Aqsa mosque is recognized and revered by all Muslims, it is a particularly powerful symbol of Palestinian nationhood.

Here, the structure is paired with what is clearly meant to be “language of death”: Following common Muslim funerary epigraphy, the inscription opens with a quote of a Qur’anic text (9:14), which reads as follows: “qatiluhum, yu‘adhdhibuhum Allahu bi-aydikum wa-yukhzihim wa-yansurkum ‘alayhim; wa-yashfi sudura qawm al-mu’minin” (“fight them, God will make them suffer at your hands, sadden them and render you victorious against them; He will restore to health the hearts of faithful”). The caption continues with the organization’s laudatory introduction for its deceased fighter, followed by his name and a description of the location and date of his death at the bottom: “kata’ib shuhada’ al-aqsa tahtasibu ‘inda Allah ta’ala shahidaha al-muqatil Sami Nasr Allah Za‘rab lladhi irtaqa ila al-‘ala (?) ithra (?) min qibali…bi-ta’rikh 25/10/2004 athna’a….‘ala ‘ubwatihi al-nasifa” (Al-Aqsa Martyrs Brigade considers to be with God its martyred fighter Sami Nasr Allah Za‘rab, who ascended to heaven after he was hit by the Zionist? tanks on 25 October 2004 when he ? on his explosive device”). Finally, both the name of the group, which is written at the top of the image, and the name of the deceased, written at the bottom, appear in red which is the color of fire, blood, passion, impulse and danger and linked to the vital force and to warlike qualities