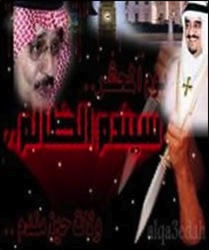 Jihadi imagery makes frequent use of Muslim political leaders, who are often criticized as oppressors of Islam and enemies of the jihadi movement. Indeed, jihadi ideologues hold that most current leaders of Muslim states are illegitimate based on a belief that no Muslim ruler may be considered legitimate unless the territory in question is governed solely by Islamic law. As a result, current leaders are often portrayed in jihadi propaganda as heretical Muslims who are willing puppets of Western countries and hence obstacles to the materialization of polities ruled according to Sharia.

In this image,  the former Saudi King Fahd appears in front of the White House and an image of Big Ben, wearing a cross, all of which emphasize the message described above. The fiery red caption reads: “yawma al-hashr sa-yandimu al-zalim” (“on the day of resurrection, the oppressor will regret”). The figure in the top left corner is likely former interior minister prince Nayef Abdul Aziz Al Saud, a frequent target of jihadists due to his role in a counterterrorism crackdown in the kingdom in the aftermath of terrorist attacks in 2003. The nature of the threat expressed by the caption is enhanced by the appearance of a raised fist clutching a dagger.