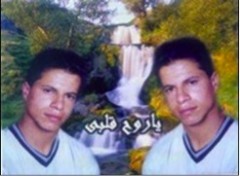 The image represents two symbols: on the left, a picture of a young man, superimposed on a green fauna background, evokes life; on the right, a mirror image of the young man is depicted against a rather yellow version of the trees and low bushes, thus expressing his death. The notion of death is further highlighted by the phrase “ya ruh qalbi” (“o, my heart’s soul/ breath of life”), which is positioned between the two pictures, delineating the two realities: life in this world, and life after death. The waterfall dividing the two sides is intended to elicit notions of the afterlife and heavenly paradise, while also suggesting an ongoing or active progress toward greater religious piety. In this manner, the waterfall is associated with the soul, its spiritual progress and, ultimately, its elevation to heavenly paradise.

Another dominant element in the image is the lush greenery, which, like the water, resonates the idea of God’s benevolence, and is symbolic of creation, life and sustenance. Green is considered the traditional color of the Prophet Muhammad’s tribe, and has been adopted as a sacred color based on Qur’anic verses (76:21; 18:65-82) and a reliable hadith (prophetic tradition or report) that associates green with “universally good things.”