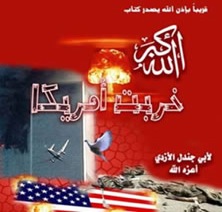 This image carries the caption: “qariban bi-idhni Allah, yasduru kitab kharabat Amrika li-abi janda al-azdi, a‘azzahu Allah” (“soon, God permitting, the book ‘America was destroyed,’ by Abu Jandal al-Azdi, may God strengthen him”). The image also contains the takbir, which is the words “Allahu Akbar” (“God is great”), to the right of the fireball mushroom cloud. The caption references a book by Saudi scholar Faris Ahmad al-Shuwayl al-Zahrani, who is known by his nickname (his kunya and nisba), Abu Jandal al-Azdi. In 2003, al-Azdi succeeded the Saudi Shaykh Yusuf al-Ayiri, who was killed on 31 May 2003 by Saudi security forces, as the leading ideologue of al-Qa’ida in Saudi Arabia.

Jihadi propaganda often references important jihadi operations/violent events in order to establish these events as key milestones that shape the current jihadi movement. Usually, the events are reinterpreted as illustrations of the effectiveness of the violent jihadi struggle and its successes in targeting its enemies. In particular, the propaganda uses examples of jihadi victory against much stronger and more powerful Western forces as evidence of the imminent victory of jihadist Islam over Western imperialism and secularism. This framing of events facilitates faith and confidence in the jihadi enterprise, and is intended to inspire others to join in the growing success of the jihadi movement. Here, the image features the burning Twin Towers of the World Trade Center. The image also features a dove. The world of birds in general is very important in the symbolic language of Islam. Pre-Islamic Arabs imagined soul birds fluttering around the graves of the deceased, and the bird continues to symbolize the flight of the soul beyond the confines of this world. The use of a dove is particularly significant, as doves are sacred in Islam because they are believed to have protected Muhammad when he ascended to heaven in his mi‘raj (night journey). The dove is also a symbol of loving fidelity, which is manifested by its collar of dark feathers around its neck, called “the dove’s necklace.” Here, it seems that the dove symbolizes pity for the 9/11 martyrs, as well as the flight of their souls.