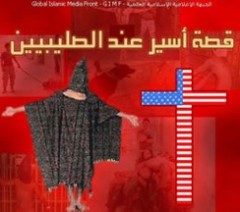 The American flag, or parts thereof (such as the stars and stripes), are widely used in jihadi propaganda to evoke negative sentiments towards U.S. foreign policy and military campaigns. The stars and stripes are also used to color other symbols in an image, thereby linking the symbols to U.S. foreign policy and military intervention in the Muslim world. Here, the image constitutes a protest against the Abu Ghrayb abuses, verbalized in the slogan: “qissat asir ‘inda al-salibiyyin” (“the story of a Crusaders’ prisoner”). The image of the figure on the left is from a famous photo from Abu Ghrayb, used by major media outlets, when they reported on the abuses at the prison.

The red of the background is the color of fire, blood, passion, impulse and danger. It is fundamentally linked to the vital force and to warlike qualities. Notably, the red lightly veils the pictures of numerous additional Abu Ghrayb prison abuses that were repeatedly shown in mainstream media when the story broke in 2004. The propagandists link the U.S., its occupation of Iraq and the Abu Ghrayb abuses with Christianity and the medieval Crusades. This conjures up the historical memory of the Crusades, and frames the U.S. occupation of Iraq as a neo-Crusade, i.e., a renewed war instigated by the Christian West against the Muslim East.