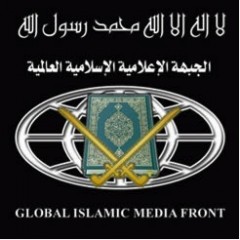 The image is one of the older logos employed by the Global Islamic Media Front (GIMF). On a black background, the full text of the shahada (Islamic testimony of faith holding that there is no god but Allah and that Muhammad is his messenger) appears at the top. Under that appears the Arabic name of the GIMF: “al-Jabha al-I‘lamiyya al-Islamiyya al-‘Alamiyya.” The dominant element in the logo is the representation of a globe with a Qur’an and two crossed swords in front of it. Jihadi visual propaganda uses images of the globe/planet earth in order to globalize localized issues and conflicts, as well as to articulate the global aims/nature of the jihadi struggle and/or particular groups.

The crossed swords in the logo suggest a desire on the part of the designer to link the group to early Islamic history and the first generation of Muslims. Swords are seen as noble weapons that embody the religious purity, nobility and righteousness that is associated with the Prophet, his companions and their successful military campaigns. This helps depict current jihadi activities as modern extensions of those campaigns and lends them an aura of legitimacy.