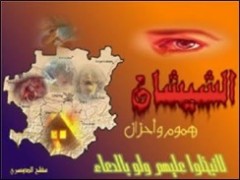 The text in the image reads: “al-shishan—humum waahzan, la tabkhalu ‘alayhim wa-law bil-du‘a’” (“Chechnya—concerns and sorrows, don’t be stingy with them, even if it’s just a prayer”). The image also contains a map of Chechnya, depicted without bordering countries or bodies of water, which emphasizes the context and scope of that specific regional jihad. The letters of the word “al-Shishan” (“Chechnya”) are colored in red, which is associated with danger and blood in the Islamic tradition. Blood is also overtly expressed in the image by the blood-dripping letters.

Overall, the combination of elements in this image is designed to evince sympathy from the viewer, but of particular importance to that end is the image of a child, injured or deceased, as well as an image of a teary feminine eye.

Map of Iraq with UBL

Logo of the Mujahadin Electronic Network

Map of Kashmir Dripping in Blood