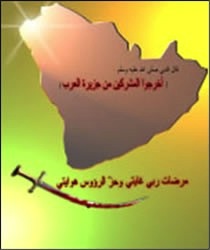 The image contains two captions. The first is a prophetic tradition (hadith): “qala al-nabi, salla Allah ‘alyahi wasallam: akhriju al-mushrikin min jazirat al-‘arab” (“the prophet, God’s blessing and peace be upon him, said: expel the polytheists from the Arabian peninsula”). The second is a rhymed slogan: “mardat rabbi ghayati wahazz al-ru’us hawayti” (“pleasing God is my goal and cutting heads is my passion”). Jihadi imagery often nationalizes its goals by isolating a theatre of jihad and representing it as a stand-alone entity. Depicting a state or country alone, without bordering countries or bodies of water, emphasizes the national context and scope of that specific regional jihad (in this case, in the Arabian Peninsula). The red of the letters is the color of fire, blood, passion, impulse and danger.

The sense of violence and the militant nature of the struggle are further enhanced by the appearance of the sword dripping with red blood.