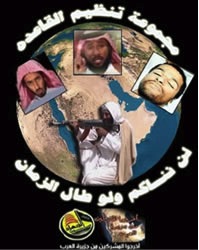 Jihadi visual propaganda uses images of the globe/planet earth to globalize localized issues and conflicts, as well as to articulate the global aims/nature of the jihadi struggle and/or particular groups. Here, the former leader of al-Qa’ida (AQ), Usama bin Ladin, appears holding an AK47 against the globe in the background, with pictures of members of AQAP surrounding the Arabian Peninsula. This highlights the peninsula as an important theater/hub of jihad and underscores the link of the struggle there to the global jihadi movement.

The logo at the bottom indicates the image was issued by al-Qa’ida in the Arabian Peninsula, or AQAP, as it reads: “sawt al-jihad (sawt al-mujahidin fi jazirat al-‘arab)” (“the voice of jihad (also known as the voice of the mujahidin in the Arabian Peninsula)”). The particular local context being propagandized in the image is expressed through the quotation at the bottom, which depicts the Arabian Peninsula with a partial quote from a prophetic tradition (hadith): “akhriju al-mushrikina min jazirat al-‘arab” (“expel the polytheists from the Arabian Peninsula”). The main caption, surrounding the globe, reads: “majmu‘at tanzim al-qa‘ida—lan nansakum wa-law tala al-zaman” (“AQ organization group—we will never forget you, even if a long time elapses”). The face on the right is the deceased ‘Abd al-‘Aziz al-Muqrin, who was the head of al-Qa’ida in Saudi Arabia and the mastermind behind a number of attacks carried out in that country, including the suicide bombing of a Riyadh housing compound on 8 November 2003, in which seventeen people were killed. His last attack was the beheading of the American hostage Paul Johnson on 18 June 2004, which occurred hours before his own death, when it was reported that he had been surrounded (by American and Saudi forces) after moving the American engineer’s body.