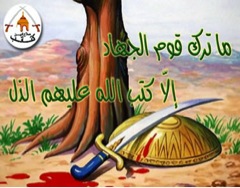 The image of a well-trodden path reflects the pivotal “path metaphor” in the Arab-Islamic tradition, and the idea that being righteous means following “a correct or straight path.” The implication of straying from that path is expressed in the slogan: “ma taraka qawmun al-jihad illa kataba Allah ‘alayhim al-dhull” (“if a people neglects jihad, Allah condemns them to disgrace”). The image is dominated by a desert landscape, which is the most common terrain across the inhabited parts of the Middle East and North Africa. Desert landscapes are commonly used as an evocation of Arab-Islamic identity and, in particular, early Islamic history, including the first generation (Salaf) of Muslims.

Blood symbolizes violence, martyrdom, sacrifice, injustice, tyranny, oppression and victory in battle. Thus, the spilled blood in the image emphasizes the strength and power of the mujahid (fighter), and aims at frightening the enemy with an inflated stature. The fighter’s pre-modern weaponry (sword and shield) links him and the jihadi struggle in general to notions of the Islamic past, especially to the first generation of Muslims and that generation’s success in jihad.