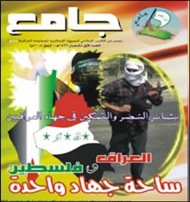 The image indicates at the top that it is a cover page of the first issue (September 2005) of the magazine published by the Islamic Front for the Iraqi Resistance (al-Jabha el-Islamiya lil-Moqawama al-Iraqiya, or JAMI). In jihadi propaganda, political symbols are often combined in such a way as to create literal and symbolic connections between them. In the case of flags, this is often done in reference to jihadi campaigns taking place in different locations. In this image, the Palestinian and Iraqi flags are brought together with the Arabic word shahada, here meaning both “testimony” and “martyrdom.” In this manner, the Palestinian and Iraqi conflicts, which stem from very different political settings, are united in representation of the larger jihadi struggle. The goal is that the audience should recognize these conflicts as “jihadi” and “Islamic,” not merely political or nationalistic. This aim is further illustrated by the slogan: “al-‘iraq wa-filastin sahat jihad wahida” (“Iraq and Palestine—one theater of jihad”). The slogan in the center of the image is written in rhymed prose, giving the aura of classical Arabic and rooting the legitimacy of the group in the Arab-Islamic past. It reads: “basha’ir al-nasr wal-tamkin fi jihad al-‘iraqiyyin” (“good tidings of victory and intensification regarding the jihad of the Iraqi people”).