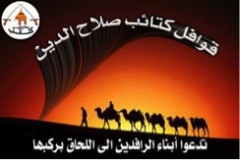 The preeminent symbol of Arab culture is the camel, as the camel made Arabian nomadic life possible. It was the favorite subject of pre-Islamic poets, and it is mentioned in the Qur’an as a sign of God’s creative power (Q 88:17). In jihadi imagery, camels are most often used to suggest a national (i.e., Arab-Islamic) consciousness. Incorporating a camel in an image may therefore imply that a group is seeking to associate its goals or actions with the Arab or Islamic community as a whole.

As in many cultures, weather phenomena are seen in Islam as an act of God. Their appearance in jihadi visual propaganda is used to evoke notions of divine power, wrath and justice, and remind the audience of God’s total inscrutability prior to creation. Here, the figurative black cloud and twister storm emanating from the caption above the convoy is expressive of divine wrath. By using such symbols, the group responsible for the image is able to represent itself and its cause as instruments of divine will and power, as the symbols imply hope, calm and the salvation that will come after the storm. At the same time, the symbols warn the enemy of the consequences of God’s wrath. The slogan verbalizes the elements in the image and spells out for the viewer the visual metaphors: “qawafil kata’bi salah al-din tad‘u abna’ al-rafidayn ila al-lihaq bi-rakbiha” (“the [camel] caravans of the Salah al-Din Brigades invite the people of Iraq to join in for the ride”).