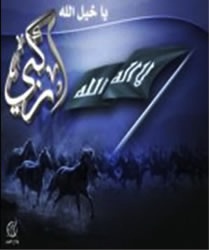 The caption reads: “ya khayl Allah, irkibi!” (“O cavalry of God, ride!”). It is a paraphrase of a famous hadith (prophetic tradition or report) in Islamic historiography on the ‘Abbasid Caliph al-Mu‘tasim (d. 842. A.D.), who called out to his troops “ride, O cavalry of God” before embarking on a jihad against, and defeating, the numerically superior forces of the Byzantine Emperor Theophilus in 838 A.D.

Another significant element in this image is the horse, which is an important symbol in both pre-Islamic Arabia and Islamic culture. Traditionally, horses have been ascribed with positive qualities of chivalry, bravery in battle and victory, as evidenced in pre-Islamic poetry, the Qur’an, hadiths and other genres of literature. For example, the beginning of the Qur’anic sura 100 talks about “running horses” that appear as galloping through the world toward the final goal, namely, Judgment Day. Horses are also symbolic of the first generation of Muslims and their successful military campaigns, and are thus often employed to evoke specific religious sentiments with regard to the military victories of Muhammad and his companions.

The black flag in the image traces its roots to prophetic times. According to hadith, a black flag was the battle flag of the Prophet Muhammad and was carried into battle by many of his companions. The image of the black flag has been used as a symbol of religious revolt and engagement in battle (i.e., jihad). In the contemporary Islamist movement, the black flag is used to evoke notions of jihad and of reestablishing the Islamic Caliphate.

Lastly, the image is colored a dominant color blue. The Arabs have traditionally considered blue magical, inauspicious and disturbing. Its use was thus thought to offer protection against the evil eye. In the context of the current image, blue may also be used to represent hope and heavenly paradise, or life after life, as Islamic tradition holds that anyone who plunges into the blue sky and sea is lost to eternity.