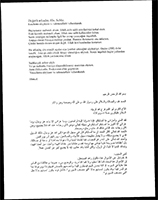 The letter consists of two main parts. The first includes `Abd al-Hamid’s expression of condolences to Abu al-
Qayim, although it is unclear what exactly happened. The second part consists of `Abd al-Hamid’s description of his situation in Afghanistan. He characterizes his circumstances as generally bad and identifies strained relations with the local people as the main reason. According to the letter, the problem stems from differing opinions of the“Taliban government.”For example, al-Hamid notes that the people see the Taliban as righteous and devoted to God while the he and his colleagues see them as unbelievers and apostates.

Letter from the Leader of One Group to Another