Attack Explanation Letter to a Sheik 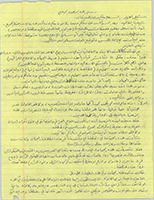 This document is a letter to a Sheikh explaining the ISI attack in Arab Jabour in Baghdad on 12 leaders of rival groups. The author states the he wants to clarify an incident that happened in Baghdad on the 26th of Rabi`al- Thani 1428 H. He gives a number of reasons for why it was not an ambush, but rather a legitimate attack. The author finishes the letter with an explanation for the attack | he claims that it was retaliation against an attack on an ISI checkpoint. The document was signed by an individual named Dr. Abu Ghofran.

Request for Organizational Responsibility for an Attack in Lebanon

Letter of Threat to Americans