Request for Organizational Responsibility for an Attack in Lebanon 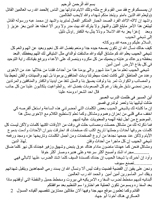 This document is a letter to a Sheikh asking for approval to select an organization for an attack on the US Embassy in Beirut. The author of the document starts out by describing the hard times that his organization has been going through, having lost members and territory in attacks by opposition groups. He then tells the Sheikh of a plan by the Lebanese to attack the US Embassy in Beirut, but that there is disagreement over who will take responsibility for the strike.

Attack Explanation Letter to a Sheik

Request for Extradition of Pakistani “Terrorists”