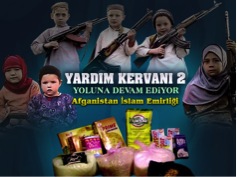 The image is propaganda material from Alif or Elif Media, the Islamic Jihad Union media company. It illustrates a few important notions: the intergenerational nature of the jihadi struggle; the role of the group in the indoctrination of the next generation (and, potentially, the parents who care for them); and the food aid provided by the group, hence the social dimensions of its activity.

The caption reads “Yardim Kervani 2 yoluna devam ediyor afganistan islam emirligi” (“the help of Caravan 2 is on its way to the Islamic Emirate of Afghanistan”). Both young boys and girls are shown bearing arms (AK-47s), signifying the continuation of an armed struggle in Afghanistan through the indoctrination of the next generation. The appearance of the food supply is intended as a tool of persuasion, to paint the group in a positive light to help swell its ranks.