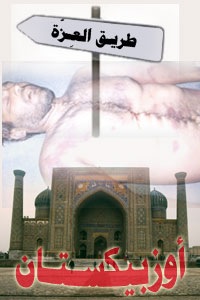 The appearance of a full body or bloody face is a common theme in jihadi imagery. According Muslim law, any person who died in defense of his faith is entitled to a Muslim burial without the customary ablution or purification process, or the change of clothing, which is necessary in the case of corpses of those who did not earn the rank of martyr (shahid). In other words, the rank of martyrdom renders a corpse legally pure. Including a shrine or mosque in an image conjures up martyr’s shrines or tombs, which constitute a class of Islam funerary monuments that may range from humble piles of stone to soaring structures. Their appearance reminds the viewer of the importance of martyrdom in Islam.

The mosque here appears to be the famous mosque of the Khast-Imam Madrasah in Tashkent. The caption on the sign hoisted in the body’s chest reads: “tariq al-‘izza” (“the path of strength/glory”). The term “‘izza” occurs in the Qur’an many times and it is almost always associated with Allah in the recurring phrase “al-‘izza li-lah” (“Glory belongs to God”).

The sign here appears to be pointing upward, as if to highlight the direction in which the martyr’s soul is believed to travel, on a path of glory, heaven bound. The sign is also likely intended to suggest that Uzbekistan as a whole is on a path of glory as a theater of jihad, as the word “Uzbekistan” appears at the bottom of the image in red.