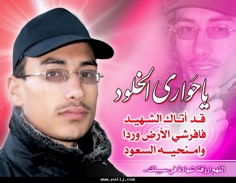 While participating in jihad gives a jihadist important religious credibility, death in battle provides immortality, as the deceased is ranked a martyr. It is believed that Muslim martyrs will be highly rewarded in the afterlife for their sacrifice and hold a special position in heavenly paradise. It is therefore not surprising that martyrdom is a central theme in jihadi visual propaganda. The figure in this specific image is a Palestinian Islamic Jihad mujahid (fighter) by the name of Muhammad al-Fiqqi. Al-Fiqqi was killed on 28 April 2010 in a confrontation with members of the Israeli Defense Forces.

An important element in the image is the caption on the right, which is the first line of a popular nashid (song) extolling martyrdom. It reads: “ya hawari (sic.) al-khulud, qad ataki al-shahid, fa-frushi al-ard wardan wa-mnahihi al-su‘ud” (“O Houris [nymphs of paradise] of eternity, the martyr has come to you, so cover the ground with roses, and give him happiness”). At the bottom in smaller print appears the slogan: “allahumma, urzuqna shahada fi sabilika” (“O God, grant us martyrdom in your path/for your sake”).