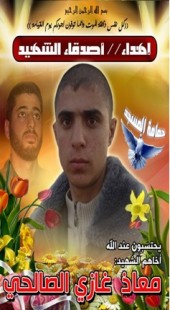 The caption at the top of the image follows the typical formula for honoring the dead. First, following common Muslim funerary epigraphy, the inscription opens with the basmalah (i.e. the words “bi-smi allahi al-rahman al-rahim,” or “in the name of God the merciful and compassionate”), and contains quotes from the Qur’an. Most often, the inscription will also include the name of the deceased and the date of death. Here, the Qur’anic quote (Q 3:185) reads: “kull nafs dha’iqat al-mawt wa-innama tuwaffawna ufurakum yawma al-qiyama” (“every soul tastes death; and you shall receive your compensation on the day of resurrection”). The rest of the caption reads: “ihda’: asdiqa’ al-shahid yahtasibuna ‘inda Allah akhahum al-shahid ma‘adh al-ghazi al-salihi” (“a presentation: friends of the martyr consider their martyred bother Ma‘adh al-Ghazi al-Salihi to be with God”). The other figure in the image is that of Mahmud Fayiq Abu al-Haj, also a deceased operative of the Shqaqi faction of Palestinian Islamic Jihad.

The image also contains the bird motif. The world of birds in general is very important in the symbolic language of Islam. Pre-Islamic Arabs imagined soul birds fluttering around the grave of the deceased, and the bird continues to symbolize the flight of the soul beyond the confines of this world. Doves in particular are considered sacred, since they are believed to have protected Muhammad during his nocturnal journey. It is in this manner that the dove can be linked to the notion of martyrdom and the rise of a martyr’s soul to heaven. The dove is also a symbol of loving fidelity, which is manifested by the collar of dark feathers around its neck, called “the dove’s necklace.” Above the dove is the caption: “hamamat al-masjid” (“the dove of the mosque”).