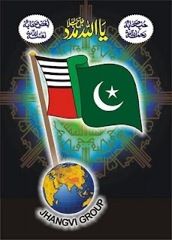 The image expresses the virulently anti-Shi‘a nature of Lashkar-e-Jhangvi (LeJ). At the top appears the slogan “ya Allah madad” (“O God, help”), which is flanked by additional text (from right to left): “hubb sahaba rahmatu Allah; baghd sahaba la‘natu Allah” (“loving the Sahaba [companions of the Prophet] constitutes God’s compassion; loathing the Sahaba is God’s curse”). The latter is directly aimed at the practice of some Shi‘is to express disapproval and hatred of some of the Prophet Muhammad’s companions, in particular, three of the “rightly guided” Caliphs:  ‘Uthman bin ‘Affan, `Umar Ibn al-Khattab and Abu Bakr al-Sadiq.

The image prominently features the LeJ’s flag with a globe highlighting Asia. Jihadi visual propaganda uses images of the globe/planet earth in order to globalize localized issues and conflicts, as well as to articulate the global aims/nature of the jihadi struggle and/or particular groups. Here, the globe highlights the LeJ’s region of operation and its global designs.