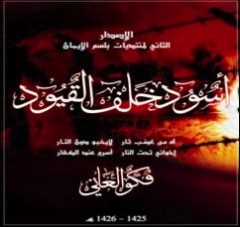 The yellow and fiery red of the image invoke the pain of separation and a longing to be united with God, that is, the longing for death and achievement of martyrdom. The red specifically resonates blood, passion and danger.  The caption reads: “usud khalfa al-quyud; fakku al-‘ani” (“lions behind bars—from the anger of a revenge that will not be put out except by fire, my brothers are under fire, prisoners of the infidels / set free the tortured”).  The latter part of the text “fakku al-‘ani” comes from a hadith.

The barbed wire surrounding the site is another visual aid used to underscore the message of jihadi activism and the sense of urgency behind the implied invitation to join the group’s struggle.  The image clearly calls for the release of “captives” likely detained by the Americans. The date suggests it was made in late 2005.