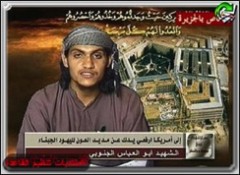 It is believed that Muslim martyrs will be highly rewarded in the afterlife for their sacrifice and that they hold a special position in heavenly paradise. It is therefore not surprising that martyrdom is a central theme in jihadi visual propaganda. The text at the top of the image is a Qur’anic verse (9:5) that is often cited by jihadi ideologues. It reads: “So when the Sacred months have passed away, then stay the idolaters wherever you find them, and take them captive and besiege them and lie in wait for them in every ambush, then if they repent and keep up prayer and pay the poor-rate. Leave their way free to them.”

The figure is identified at the bottom as Abu al-‘Abbas al-Janubi, one of the 9/11 hijackers. The image is part of a clip released by al-Sahab media documenting al-Janubi’s last will before participating in the 11 September 2001 attacks. The bottom caption reads: “ila amrika, irfa‘i yadaki ‘an madid al-‘awn lil-yahud al-jubana’” (“to America, lift your hand from extensive support to the cowardly Jews”).