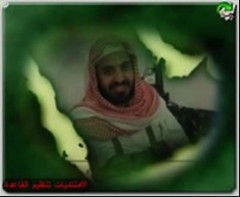 It is believed that Muslim martyrs will be highly rewarded in the afterlife for their sacrifice and that they hold a special position in heavenly paradise. It is therefore not surprising that martyrdom is a central theme in jihadi visual propaganda. In this specific image, we see a common technique for depicting martyrs in jihadi visual propaganda, which combines a photograph of a martyr with a representation of the country in which he was killed or from which he originated. The purpose is to draw attention to the jihadi activities taking place within that country, while also emphasizing the oppression of the ruling powers in the country. Thus, this method both nationalizes the martyrdom and internationalizes what began as a local conflict. The fact that most of the Saudi Arabia map is colored in green—which is considered the traditional color of the Prophet Muhammad’s tribe and which has been adopted as a sacred color based on Qur’anic verses (76:21; 18:65-82) and a reliable hadith (prophetic tradition or report) that associates green with “universally good things”—further emphasizes the Islamic/religious aura of the image. The prominent use of green also resonates the idea of God’s benevolence, and is symbolic of creation, life and sustenance. The image depicts Ali bin Hamid al-Ma’badi al-Harbi, one of the suicide bombers from the 12 May 2003 attack on three residential compounds in Riyadh, Saudi Arabia that has been dubbed “badr al-riyad.”